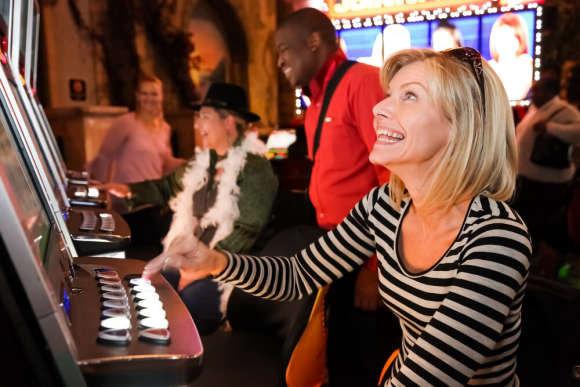 A comedian’s wife is the latest million slot jackpot winner. Comedian Justin Rupple and his wife, Kathryn were in Nevada for a series of performances that Rupple was scheduled for. Kathryn hit a $1.4 Million Slot Jackpot while playing at the Grand Sierra Resort on July 8th.

Kathryn was playing the casino game Wheel of Fortune Triple Red Hot 7s Slot Machine when she became an instant millionaire. Kathryn and her husband were staying at Grand Sierra Resort while the comedian performed his shows with Reno Tahoe Comedy.

When asked what they would use the money for, the couple said that some of the funds would be used to pay debt and the rest would be used for traveling. Justin Ripple is a well-known comedian and voice actor that has regular gigs in the area. His voice work has been featured in several high-profile movies including “How to Train Your Dragon".

Although online gambling has certainly come a long way, the market is still very much in the shadow of the much more popular sports wagering market. Since the Supreme Court gave the go-ahead to regulate the market on a state-to-state basis, the sports betting market in the country has grown by leaps and bounds. Today, sports betting is available in almost three-quarters of the states.

Online sports betting is also available in more than half of all states. Sadly, however, online casinos aren’t as accessible, as online gambling is currently only allowed in 6 states. Sports betting is everywhere, even in the states that are yet to legalize their markets.

Advertisements for sportsbooks are almost expected in live broadcasts with more stadiums and arenas devoting signage to popular sportsbooks such as FanDuel and DraftKings. In addition, some states even allow residents to wager on college teams, which was a taboo issue not too long ago.

So why hasn’t online casino gaming managed to generate a similar buzz? iGaming is currently only permitted in New Jersey, West Virginia, Delaware, Connecticut, Nevada, and Pennsylvania. Even though sports betting is clearly the more popular vertical, iGaming is actually a much bigger revenue generator.

The growing number of online gamers is one of the biggest contributing factors to the growth of online casinos. According to experts, there are more than 1 million gamers in the US alone, which means that there is a ready and willing market. Also, since the pandemic brought the entire world to a halt, online casino searches reached an all-time high during the worldwide lockdown, which further led to the growth of the market.

As businesses all over the world were forced to shut down for months on end, online casinos were thriving. So much so that experts predict that the online casino industry could be worth an impressive $321 billion by 2026. In the US, however, online casino gaming hasn’t quite caught on despite being legal for more than a decade.

There could be a couple of reasons why iGaming hasn’t taken off in the US as it has in the rest of the world. For instance, there is currently no unanimity among online casino gaming companies, which includes tribal operators. Secondly, the legislature differs from one state to the next, which has made expansion more difficult than it should be.

Thirdly, as a result of the pandemic, most of the states are still struggling financially. Not shockingly, a great driver of iGaming adoption in the country has been the need to boost revenue among the different states. Still, analysts believe that as many as 12 states may start considering legalizing their online casino markets within the next 2 to 4 years in an effort to generate more revenue for the state.

So which states are expected to legalize iGaming this year?

Before the year is up, several states are expected to legalize their iGaming markets. Indiana appears to be most likely to legalize its market sooner than others as the state is in dire need of additional funds. The legislature in the state approved sports wagering as part of the expanded gaming package a little under 3 years ago.

As such, it is expected that the leading sponsor of the sports betting bill 2019, Senator Jon Ford, will work as hard to fill an online casino gambling bill in the General Assembly next year. There is a clear appetite for iGaming in the state so the officials need to get together and do everything possible to modernize the burgeoning gambling market in Indiana.

Lawmakers in New York also see the potential of online gambling. 2 years ago, lawmakers in the Empire State legalized online sports betting, and earlier this year, the legislature also commenced a budget that set the ball rolling on the process of downstate casino bidding. The good news is that there is a lot of support for the legalization of iGaming in New York.

In particular, State Senator Joe Addabbo has been spearheading the fight for legalization. The state is also in search of new revenue streams thanks to the ongoing economic downturn that has affected the flow of cash into state coffers. As such, a thriving iGaming market could be just what is needed to generate that much-needed income.

Although iGaming wouldn’t generate all the funds that Indiana and New York need. A regulated market would certainly help to raise more revenue. As thing stand, mobile sports betting has already surpassed all expectations in the Empire State. New York is projected to produce more than $550 million in sports betting tax revenue in 2022 and that figure may shoot the roof as the football season continues to unfold.

It is clear that iGaming is in demand. Most of the states have already passed their fair share of expanding gaming legislation over the last 4 or so years. However, online gaming is still fresh and may just be what is required for some of the states to deal with their economic struggles.

There is still a lot of work that needs to be done to get state gaming regulators through the licensing process that will get iGaming up and running. So, for now, the only thing that we can do is watch and wait eagerly for the tides to turn.