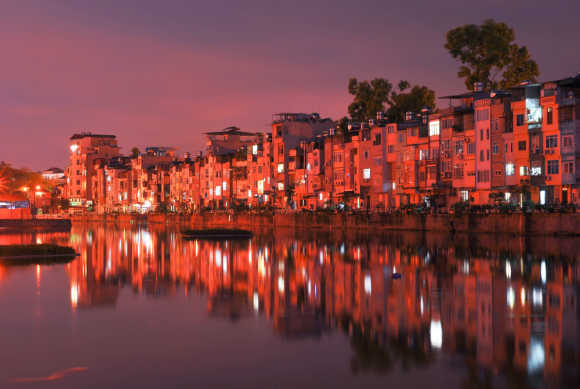 Police in Vietnam have detained more than 380 people on suspicion of running the world’s biggest-ever underground online gambling ring.

The group, aged between 18 and 24, were arrested for operating over 100 online rooms from an area in Hai Phong City, 100 kilometers east of Hanoi.

Around 500 police officers were involved in the raid.

In a statement, the Ministry of Public Security said: “This is the largest ever gambling ring in terms of both the number of foreigners involved and in terms of money in Vietnamese territory.

“This is a criminal organization with a new and sophisticated method of operation, implemented on cyberspace, organized under the ‘cover’ of foreign investment enterprises in Vietnam.”

It has been reported that the base for the ring was heavily guarded and that members had very little contact with the outside world. It is thought that the gang both worked and lived in the small building, allowing them to work around the clock.

During the raid, police confiscated an estimated 2,000 smartphones and 530 computers.

The Vietnamese government has said it is likely that all of the men will be deported and face prosecution in their own countries.

Gambling has been illegal for Vietnamese people since Vietnam's Communist regime, following the country’s reunification in 1976.

Usually, only travelers with foreign passports are allowed to gamble at the eight casinos in the country.

It is assumed that these visitors bring in a hefty income for the country, with plans for another three casinos on the way.

Last year the country agreed to allow locals to gamble at the same casinos on a trial basis.

Locals have to prove they are ‘high earners’, meaning they earn more than $450 per month. The average for the country is around $150.

Vietnam has refused to license and regulate Chinese online gambling operations, despite the demand for it.

The Philippines made the move to do so in 2016.

It seems that Vietnam needs to take note of people’s desire for gambling, similar to how New York hired professionals to study the demand for gambling demand in the state.

The Philippines' gambling industry is huge, and has plans to open a new cruise harbor near one of its major casinos by 2021 in order to expand even more.

In contrast, those who wish to run online gambling operations in Vietnam are forced to do so secretly, and keep their rings going by bribing local officials.

In April, the chief inspector of Vietnam’s Information Ministry Dang Anh Tuan was arrested in connection to a $420 million online gambling operation.

It was reported he had violated laws by taking ‘undue advantage’ of his government post, which he had held since 2015.

In November, two senior Vietnamese police officials were found guilty of running an underground online gambling ring which made millions of dollars for the pair.