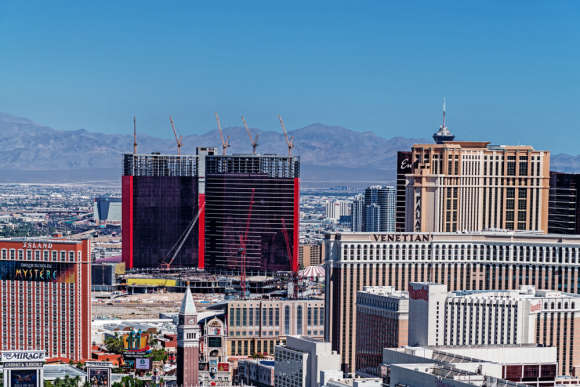 Vegas really does mean business. To demonstrate this fact, Resorts World Las Vegas in conjunction with Clear Channel Outdoor Americas recently launched a digital ad on the resorts’ 3 digital displays, which are all located on the façade of Resorts World. According to witnesses, the ad is so big, bright, and colorful that it can be seen from miles away, which is probably what was intended.

Resorts World’s 3 impressive, full-motion digital out-of-home displays will be used by Clear Channel to offer advertisers of all types premium visibility and the most up-to-date digital signage. So far, Resorts World has one of the biggest exterior LED building displays in not just Vegas but the country, which makes for prime advertising space for any businesses looking to attract as many eyeballs as possible.

The exterior advertising that will be provided by the 2 companies will go a long way in helping brands that are interested in engaging with targeted customers that frequent the Strip are expected to do so a lot more effectively.

Clear Channel is easily one of the most established outdoor advertising companies in the country. It boasts a broad print and digital footprint in at least 31 countries across Asia, Europe, Latin America, as well as North America. Clear Channel boasts more than 14000 digital billboards all across the country.

Resorts World Las Vegas is going to feature a total of 3,500 guest rooms and suites across its 3 Hilton hotels. It is also going to highlight more than 40 world-class dining options, as well as one of the most distinct entertainment hotspots on the Strip.

As mentioned earlier, Resorts World Las Vegas 3 digital displays are some of the most remarkable in the country. The screens have been designed to operate chronologically thus offering an unprecedented storytelling experience for advertisers. According to experts, these digital displays will change the way digital out-of-home advertising is done.

Resorts World Las Vegas alongside Clear Water will collaborate with brands and businesses all over the state and beyond to execute creative, immersive, and unique advertising campaigns as business travel and tourism keeps picking up in Sin City.  The 3 digital displays at Resorts World will be fully animated.

The first screen is approximately 100,000 square feet and will be located on the West Tower wall. The wall faces northbound traffic on the Strip. The West Tower Digital Wall is the largest of the 3 exterior LED displays and is the largest in the country. The digital wall is visible from as far as Las Vegas Boulevard. However, northbound traffic along the I-15 Freeway can also view the digital wall.

The East Tower Digital Wall is approximately 19,000 square feet and offers advertisers a prime location to attract potential customers and buyers. The East Tower wall is situated on the corner of Las Vegas Boulevard and Convention Center Drive.

The vertical display of the East Tower wall is visible alongside Las Vegas Boulevard, which will easily target incoming traffic to the resort. People coming from the east of the Las Vegas Convention Center, which is where the newly renovated $1B West Hall is located.

The first ad was free

Las Vegas has always been a top choice for meeting, conventions, and tourism, consistently providing visitors with an unparalleled experience that they would be hard-pressed to find elsewhere. After months of dealing with the pandemic, Vegas is finally ready to operate at 100% functionality.

The entertainment capital of the world has gradually been seeing a surge of incoming visitors, most of whom haven’t been able to travel since the pandemic was announced early last year. However, as the Nevada governor has continued to ease restrictions, more people have been arriving at the city gates and reaping great deals and rewards as a result.

To cater to the demand, the Nevada Gaming Control Board finally gave the go-ahead for some Vegas hotels to resume operations at 100%. In particular, Wynn Resorts’ 2 properties, namely the Wynn and Encore, will now operate its resorts and casinos at 100% capacity, thus becoming the first operator in Sin City to do so. According to Nevada’s Governor Steve Sisolak, most hotels on the Strip should start operating at 100% capacity by June.

Hotels and casino floors being able to operate at 100% capacity will do wonders for the development and the recovery of the Strip. While a full recovery is not going to happen for a couple of years, operating at full capacity is an excellent start and it is one that a lot of business owners across the country have been waiting for. The influx of new business will be critical for Vegas’ recovery which has always been heavily reliant on the hospitality sector to thrive financially.