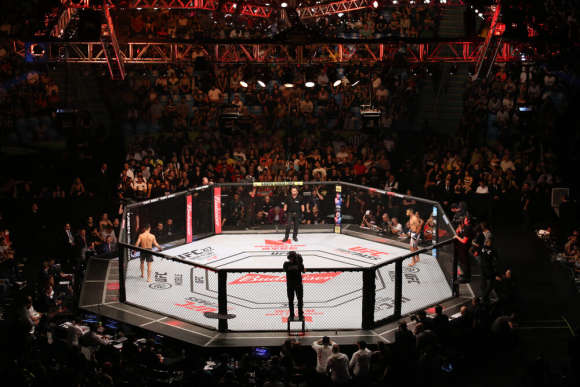 The UFC 264 Location is Confirmed to be Las Vegas

The UFC 264 Location is Confirmed to be Las Vegas

Conor McGregor’s long-anticipated return to the ring is finally within the horizon. After waiting for months, MMA lovers will finally get to witness their favorite Irish make his comeback. The UFC announced not too long ago that the UFC 264, which will feature the McGregor vs. Poirier fight will be held in Las Vegas.

UFC President Dana White announced that the fight would take place in the infamous T-Mobile Arena before a sold-out crowd. The fight, which is scheduled to take place on July 10th is the 3rd time that the 2 fierce fighters will battle it out for the title. McGregor and Poirier first faced off in 2014 as featherweights. Poirier lost the fight to McGregor in 2014 but McGregor later lost to Poirier through a 2nd round TKO at UFC 257 held in Fight Island, Abu Dhabi.

It makes sense that UFC would choose to mark its return by holding its first fight in Vegas. Pre-pandemic, Vegas was a favorite having held several landmark fights in Sin City. It has also held fights in Florida as well as Fight Island situated in Abu Dhabi. Nevada is a great choice because the city has been gradually opening up in the last couple of weeks.

Restrictions will be lifted soon

Nevada Gov. Steve Sisolak expects that Nevada’s economy should be back in full swing by June 1st. The Governor’s office announced not too long ago that the Governor would be ending social distancing protocols and restrictions by 1st May, which will be just in time for UFC to hold its pay-per-view fight.

Nevada, like the rest of the country, has been dealing with intense regulations to keep the public safe. Although these health restrictions have certainly helped keep the number of infections and consequent deaths at a minimum, they have had a devastating impact on local businesses. The tourism industry in Vegas has been non-existent for months, which has caused thousands to lose their jobs and homes.

But fortunately, things have been looking up in Nevada, and tourism numbers are slowly starting to pick up again. Better still, casino resorts and businesses are up and running. So much so, that Vegas’ biggest project to date, Resorts World Las Vegas, should be opening its doors for the first time in the coming weeks, which is a signal of just how things have improved on the Strip.

The atmosphere is electric in Vegas

Everyone knows that Vegas is one of those unrivaled destinations for anyone that is looking to have a great time. The good news is that amid the pandemic, Vegas has been laying low, planning and putting everything together for the eventual return of tourist crowds.

Casinos are opening all through the city. Resorts World may be the biggest project to launch but a few others have already been successfully launched. For instance, the Virgin Hotels Las Vegas which boasts more than 1500 rooms welcomed its first round of guests not too long ago. Last year in October, Vegas also welcomed Circa Resort & Casino, a 777-room resort and the first new casino to be launched downtown in more than 40 years.

When sports leagues were shut down in March 2020, other leagues across the country and the world were either canceling or postponing events. UFC stood as one of the only leagues that were still in play and the leagues received a lot of backlash at the time as a result. However, this did not stop the league from holding events all over the world successfully. Therefore, if there is any league that is ready to welcome a sold-out crowd, it’s the UFC.

Atlantic City will also soon get a taste of MMA

The professional Fighters Leagues recently announced that it would be returning to AC for its 2021 Regular Season thanks to its continued residency at Ocean Resort Casino. The PFL is the second most popular Mixed Martial Arts organization; UFC still stands as the largest mixed martial arts organization in the world.

The PFL will be returning to a newly renovated venue at the resort’s Ovation Hall. This hall has been redesigned for a made for TV and streaming experience since no spectators will be allowed to attend the fights. Athletes will operate in a bubble to ensure the safety of everyone involved.

Anyone taking part in the fight will be required to arrive at least 17 days before their scheduled fights, which will give plenty of time for the fighter and their coaches to quarantine themselves. The PFL intends to work closely with health professionals just like other leagues have been doing during the pandemic.

The PFL season is expected to begin on April 23rd and will be headlined by Anthony Pettis, who is a newcomer but former world champion. Pettis will be facing knockout expert Clay Collard. The PFL will be the second sporting gig that has been hosted in Atlantic City since the pandemic crackdown started last March.

The first sporting event was the recently concluded 2021 MAAC men’s and women’s basketball tournaments that took off without any reported incidents. Unlike the PFL, the MAAC allowed select family and friends of athletes to attend the games, which were held at the Boardwalk Hall.

While other combat sports organizations have been staging events all through the country in parts such as Florida, Vegas, and California, this will be the first time that Atlantic City is hosting any combat fights, much to the delight of an eagerly awaiting MMA fan base in the city.