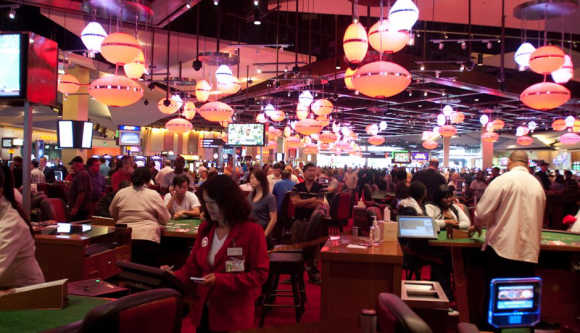 The move has now made it possible for Pennsylvania gamblers to once again bet from their iPhones.

Rush Street Interactive, which manages PlaySugarHouse.com, said it has deployed ‘a simple and clean solution’ that allows its Pennsylvania players to wager money using iOS devices.

In late May, Rush Street Interactive’s SugarHouse became the state’s first casino to go live with both online and mobile betting following its legalization.

Last week it also added a variety of online casino games to its website and app.

However, Apple users were struggling to use the resources because of a change in the tech provider’s policy.

The App Store introduced a new set of rules, stating that HTML5 games “distributed in apps may not provide access to real money gaming, lotteries, or charitable donations.”

It went on to say that it was only appropriate for code that is embedded in the binary and can be reviewed by Apple.

The change immediately made things much more difficult for casino owners, who were then unable to repackage their gambling websites easily using HTML5.

However, Rush Street Interactive seems to have found a way around the problem by asking players to register on their mobile devices at the PlaySugarHouse website.

Users of the site are then directed to download the GeoGuard Location Validator from the App Store.

This app is used to make sure that mobile users trying to access its games are actually from Pennsylvania. After verification, players are free to use the site and app as normal.

The site is one of the first to find a way to allow iOS users to access its games.

In a statement, Rush Street Interactive said it was ‘thrilled’ to be able to offer loyal users with Apple devices the use of the website. It added that the solution provided ‘a way to get online and begin playing on our award-winning platform.’

This new announcement is not only great news for the site’s Apple users, but should also prove to be fantastic for the company. It is hoped that the discovery will give RSI an easy edge over its competitors - Parx Casino and Hollywood Casino.

Neither property is currently part of the new solution using the geo tracker for verification.

The simple loophole has saved RSI a hefty amount of time and money when it comes to mobile app development.

If the solution hadn’t surfaced, the company might have needed to make a separate iOS app from scratch.

This would not only have excluded a large portion of RSI’s customers but would also have led to a significant dip in revenue.

It now seems that if Rush Street Interactive’s Pennsylvania competitors want to keep up, then they will need to quickly jump on the bandwagon.