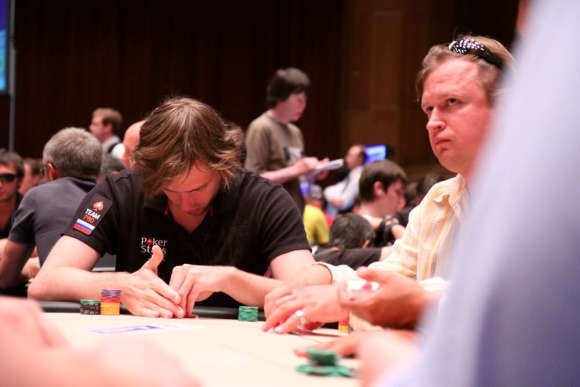 This year’s edition of the PokerGO Tour promises to be the biggest and the best yet. According to the organizers of the tournament, the championship has promised to award the finalist with a winner takes all prize of an impressive $500,000. When the final PokerGO Tour championship finally rolls around in December, the organizers have announced that they would be making major changes in its format this year.

According to the poker tournament organizers, the final 21 players on the leaderboard will convene for the event but with a slight change in this year’s format. The players’ starting stacks will be based entirely on their points standings. This implies that the leader of the race will start with the greatest number of chips while the last player will start with the shortest stack.

In the 2-day event, these players will battle each other until the champion is crowned. The final event will feature 6 players at the final table who will vie for the title of the 2022 PokerGO Tour champion. The person that beats all 5 opponents is the one that will be awarded the $500,000 payout, as well as the title of this year’s Tour.

This year’s season of PokerGo Tour, which kicked off on January 5th, has been going well. The tour commenced at the start of the year at the Venetian Las Vegas, which has been playing host to various events in the Poker Go Tour since its first season. The first event of this year’s season was a $10,000 buy-in high roller, which had been organized as part of a series of 4 high roller tournaments.

In addition to the 4 high roller tournaments that were held at the prestigious Venetian, the first half of this year’s PGT season also included several noteworthy events. These events included PokerGO Cup, PokerGO Heads-Up Championship, ARIA High Rollers, Super High Roller Bowl Russia presented by Luxon Pay that took place in July, U.S. Poker Open, and the star-studded Super High Roller Bowl VII, as well as the brand new the Stairway to Millions.

The first-ever Stairway to Millions was held in Vegas within the PokerGO Studio at ARIA Resort & Casino. This event took place from January 12th and concluded on January 20th with 8 events on the schedule. Nick Petrangelo won the $100,000 buy-in finale and walked away with a first-place cash prize of $1,026,000, as well as the title of the very first Stairway to Millions “Main Event” champion.

The PokerGO Cup, which has been taking place each year, was also held in the PokerGo Studio with 8 high stakes poker tournaments that culminated in the $50,000 Main Event. This year, it was Sean Perry that topped the 32-entry field in the final event. In the end, Sean Perry would walk away with $640,000 in prize money and a second victory for the poker player in the PokerGo Tour.

Even though Perry did not walk away with the coveted overall PokerGO cup title, he did earn 384 points for this year’s PGT leaderboard. Last year, Perry battled it out with some of the best poker tournament players behind the legendary Ali Imsirovic, and Micheal Addamo. This year, Perry will be looking to secure the PGT Player of the Year title.

The Super High Roller Bowl Russia was held in March in Sochi Russia and was presented by Luxon Pay. The Russian event featured 11 event series with a range of buy-ins between $25,000 and $100,000. The final event was a $250,000 bowl that kicked off on March 11th.

The Super High Roller Bowl was very quickly followed by this year’s US Poker Open which was held in Vegas. The final table of this year’s US Poker Open Event #12, which was a $50,000 No-Limit Hold’em saw Sean Winter emerge victorious. Winter reached the final table to rip the Golden Eagle Trophy from Tamon Nakamura. As a result of his victory, Winter took home the grand finale cash prize of $756,000, as well as the U.S. Poker Open champion title.

The PokerGO Heads-Up Championship then followed in April. This was also the first time that the brand has organized this event which saw Chino Rheem emerge the winner of the first-ever PGT Heads-Up Showdown. After 3 days of non-stop action in the $25,000 event, the tournament finally wrapped up and Rheem took home the top prize of $400,000.

The PGT Heads Up Showdown was shortly followed by the ARIA High Roller Series, which was a series of tournaments for high rollers that went down at the PokerGo studio. Buy-ins for this high roller series ranged from $10,000 to $200,000. During this high roller tournament, it was Chris Brewer that would emerge the champion of event 6, a $15,000 No-Limit Hold’em that would mark his first win of the year.

Super High Roller Bowl then commenced this May returning to Europe once again for the first time since August last year. During last year’s iteration, Wiktor Malinowski outlived a field of 41 poker players to walk away with the grand cash prize of $3,690,000. Last year was the first time that the Super High Roller Bowl had been held in North Cyprus.

This year, the winner of the Super High Roller Series Europe was Daniel Dvoress. Dvoress won event 6, which was a $50,000 No-Limit Hold’em tournament to take home the first-place prize money estimated at $731,000.

The Super High Roller Bowl VII is expected to take place in September this year at the PokerGO Studio at ARIA. This high roller event is expected to be star-studded and will feature some of the most advanced poker players in the game. The high roller event will have an extraordinary $300,000 buy-in which will lead to a multi-million-dollar cash prize for the first-place finisher.

The PokerGO Tour is an arena for some of the most experienced and elite poker players in the globe and only attracts the most talented poker players that the poker market has to offer. As such, the final event at the end of the year will definitely be a highly anticipated one.