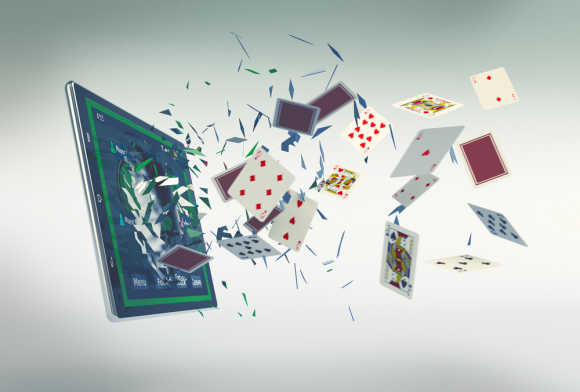 Two casinos in Pennsylvania are the latest in a short line of venues where online casino gambling has passed the test.

Both Penn National's Hollywood Casino near Hershey and Parx Casino in suburban Philadelphia have rolled out online gambling to people across Pennsylvania after passing a three-day trial.

The venues were both watched over by state regulators.

Currently, Nevada, New Jersey, and Delaware are the only other states where this form of casino gambling is legal.

It doesn’t come cheap, however. Casinos will pay a fee of $10 million each to launch and operate a full package of online gambling games both online and through mobile applications.

The two casinos have rolled out most games that would be seen in any normal venue, other than poker.

The sites and apps will be accessible statewide 24-hours a day for patrons who are 21 and over.

It is expected that online poker will get rolled out later in the year.

Figures from the American Gaming Association have already shown that Pennsylvania is America’s second-largest state for commercial casino revenue, behind Nevada, at $3.2B last year.

This isn’t the first time Pennsylvania has made a stance when it comes to gambling.

In 2004, the state made history by legalizing gambling with Act 71, which has since injected millions of dollars into the economy.

Opponents attempted to block casino gambling in 2005 through a legal battle, however, Pennsylvania prevailed in the court case.

The Philadelphia City Council passed a resolution for a referendum allowing the city and its government to have its say in the placement of casinos.  This measure was deemed necessary because the proposed locations for two new casinos in the state angered some people.

However, construction continued, was completed and succeeded as planned.

Horse racing was one of the first types of gambling to be legalized in Pennsylvania with the passing of the Race Horse Industry Reform Act in 1959. Meadows Racetrack opened in 1963, the first race track to do so after the passage of the act.

Online and phone betting on racing were permitted, but greyhound betting was not allowed. Off-track betting was allowed beginning in 1988.

Three resort licenses were also approved, but only two of the properties have thus far been completed.

In 2010, poker and blackjack were added to expand the license.

Even now casinos in the state continue to announce record-breaking revenues, which is set to sky-rocket with the introduction of online gambling.

State law H271 passed in 2017 authorizing an expansion of gambling opportunities in the area, which meant residents could look forward to a new future of online gambling.

The bill was passed in October 2017, with licensing authorization for 13 online gambling sites.

Pennsylvania Gaming Control Board (PGCB) announced that nine casinos have applied for comprehensive licenses, however, only the two so far have been accepted, with the other pending trial.

The other four casinos in the state that did not apply before the first deadline will be able to open in the future, but higher fees will be demanded.

Swedish game developer NetEnt has also applied for a Pennsylvania gaming license which could be one of the first casino slot sites in the state.

It is expected that the Pennsylvania online gambling sites will be live and ready for use by the end of the year.

The state’s gambling policy is the most relaxed of the four states that have now passed bills on online gambling.

Online casinos, fantasy sports, and sports betting have all received the green light by the state. An online lottery website is also operative. Interestingly, Nevada, with the greatest reputation for gambling only allows for online poker.

New Jersey made online casino gambling legal in 2013, and Delaware did so in 2012. The chances of Nevada joining the bandwagon to permit online casinos, however, are reportedly extremely slim.

The state fears that permitting online gambling will have a negative effect on the revenue of its land-based resorts.

New Jersey welcomed two new land-based resorts earlier in the year in Atlantic City, both of which also have their own respective online gambling sites.

Nevada is very much known to be keeping an eye on the successes and failings of these websites in order to decide on its next steps.

It’s not only online casinos that have benefitted from the new bill, land-based resorts are also seeing some changes for the better.

At the same time as the passing of H271, Pennsylvania authorized the launch of 10 new mini-, or satellite, casinos,

It is hoped that these smaller, more intimate venues will offer up to 750 slots and 30 table games in a much more social environment.

Resort-style casinos in category three have relaxed certain rules with the possibility of an increase in the number of slot machines and the removal of the currently necessary membership fee.

The sale of online lottery tickets has also been authorized, and the state is already massively benefitting from in revenue.

The state’s iLottery was launched on June 4, 2018, consisting of games that do not include a standard draw. Although this is classed as online gambling, many casino operators are not happy about it: mostly because iLottery does not have to pay the hefty fees they do.

The problem is that not only does Pennsylvania make the second-highest amount of casino revenue America, but it also pays some of the highest online gambling taxes because of it.

H271 also sets taxes for the other permitted online gambling products. Table games such as poker, blackjack, roulette, and craps, are set to be taxed at 16% - while sports betting will be taxed at 36%.

Parx will be adding sports betting to existing off-track betting locations in 2019.

Revenue in New Jersey casinos is down more than 40 percent since 2007, and only Nevada casinos win more money than Pennsylvania.

Despite all the new laws permitting variations of gambling in Pennsylvania, illegal gambling is still very common in the state. A number of bars, private clubs, truck stops, fire company social halls have long had gambling machines such as slot machines or video poker machines on the premises for which legislation continues to be brought forward, but has not yet been passed.

Some venues are currently getting past the law by operating a new phenomenon, skills machines. These look very much like video slot machines or VGT’s, but a court decision ruled that these did not class as gambling machines and therefore could be bought and kept license-free.

The Pennsylvania Local Option Small Games of Chance Act became law in 1988, allowing for a very small amount of gaming in non-profit organizations and taverns.

The Pennsylvania Bingo Law was passed in 1981 and allows organizations to conduct bingo games.

Enforcement is currently operational by the Pennsylvania State Police Bureau of Liquor Control Enforcement on more than 40,000 illegal machines.

The high tax rate has a lot to do with the immense number of people who try to bypass the law and keep their own in-house gambling on the down-low.

A tax rate of 36% and a license fee of $10M per venue has meant that the amount of underground gambling has soared in recent years because many simply cannot afford the fees.  This is especially true for smaller independent venues.

Future of online gambling in the state

There is still much to offer legally with the future of gambling in the state, though, including the possibility of truck stops and airports offering more opportunities for gambling.

Truck stops could start to operate up to five slot machines each and interactive gambling at airports may become an everyday necessity.

It’s clear that gambling, both online and off, brings in huge profits and tourism to Pennsylvania. It’s very unlikely to slow down for this exact reason, meaning we’ve definitely got much more to see and learn in the world of gambling in the history-making state.