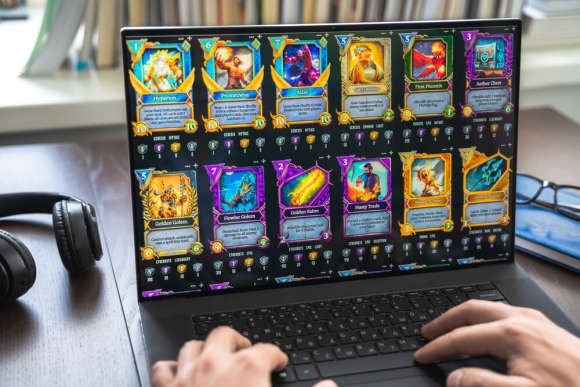 During Light & Wonder’s first investor day, the newly rebranded gaming operator maintained its optimistic outlook that its prices were expected to rise as time progressed. Light & Wonder appears to be so optimistic that the gaming brand even went ahead to forecast the revenue opportunity available; a $70 billion total addressable market.

As a result of this forecast, the Light & Wonder stock grew higher by more than 8% making it one of the best performing gaming equities yet. Light & Wonder was formerly known as Scientific Games. However, on April 29th this year, Scientific announced that it would complete its name change, as well as its stock ticker symbol to Light & Wonder.

Since its rebrand, Light & Wonder has been trading on the NASDAQ under the “LNW” ticker symbol. According to Light & Wonder, the decision to take on a new name reflects the brand’s shift to focus on online gambling. Light & Wonder’s strategic vision is to become the top cross-platform international iGaming company.

In this regard, the brand wants to position itself as the creator of the best games accessible online and through mobile gaming in both free to play, as well as real-money gaming markets. To help it pursue this mission, Light & Wonder reported that it had completed the sale of its lottery business, SG Lottery, this April to a private equity company known as Brookfield Business Partners.

This deal was agreed upon in October 2021 and was worth an estimated $5.8 billion in gross cash proceeds. It was also worth approximately $5.0 billion in net after-tax cash earnings. The sale of its lottery business to Brookfield marked a major milestone in transforming the brand, as well as its balance sheet. The net profits from this sale were utilised to execute a balanced approach to capital allocation.

This included pursuing debt reduction with the aim of paying off at least $5.0 billion of Light & Wonder’s existing debt. The profits from the sale were also utilised for supporting share buybacks to return a large amount of capital to shareholders in the future. A huge percentage of the profits from the sale was also utilised for investment in other growth opportunities.

Not too long after it finalised the sale of its Lottery business, Light & Wonder also sold off its sports betting arm, OpenBet sports to raise more cash. Before its rebrand to Light & Wonder, Scientific Games had already announced that it had entered into an agreement with Endeavor Group Holdings for the purchase of its Open Bet sports betting business.

Under the terms of this deal, Scientific Games received approximately $1 billion in cash, as well as $200 million in common stock. OpenBet is one of the most recognizable international online sports betting tech companies. OpenBet has been offering a well-built ecosystem of technology, sports betting content, as well as other services to some of the biggest and best iGaming operators in the world.

According to the OpenBet, the brand boasts more than 70 customers from all corners of the world, including the 24 largest sportsbooks across 12 states. The sale of OpenBet was all part of Scientific Gaming’s plan to divest the platform in an effort to maximize value for its shareholders while also rapidly advancing the group’s plan to become the leader in cross-platform gaming.

As a result of the sale of these 3 huge brands, Light & Wonder's financial profile has never been brighter. According to the forecast given by Light & Wonder, the brand has since recorded double-digit growth, as well as a high mix of repeated revenues and strong margins that has resulted in renewed cash flow generation.

During the investor day event, Light & Wonder forecast adjusted earnings AEBITDA growth of $1.4 billion through 2021. By shedding its lottery and sports betting business, Light & Wonder also states that its debt burden has gone down almost by half from $8.8 billion to its current $4 billion debt. The brand now purposes to have$10 million in capital saved by 2025, which will allow it to further pursue its expansion plans.

Light & Wonder has already made some major moves this year, entering into strategic partnerships with various brands. For instance, not too long ago, the company finalised its acquisition of Playzido, a well-known game supplier and content creation platform provider. According to Light & Wonder, this partnership will allow the gaming company to accelerate the pace at which it can collaborate with game studios and operators around the world.

This, of course, would fulfil Light & Wonder’s mission to co-create new and exclusive gaming content for players around the globe. Light & Wonder intends to utilise Playzido’s Remote Gaming Server, which stands as one of the best in the iGaming industry to create and deploy as many high-quality games as possible in the shortest period.

Light & Wonder also extended its partnership with Entain, which has existed since it was forged in 2018. Entain is still the brand’s biggest contract in the UK, meaning that their partnership has now been extended through 2030. Under this partnership, Light & Wonder will keep supplying Entain’s betting offices with terminals, particularly in Entain’s Ladbrokes and Coral wagering offices.

As the cash flow stabilises and increases, Light & Wonder is hoping to pursue even more strategic mergers and acquisitions, as well as enhance shareholder rewards. At present, the Light & Wonder brand is in the process of a repurchase program worth an estimated $750 million. With both the sports betting and lottery arms of the business disposed of, the brand can now focus exclusively on gaming machines and table games for brick-and-mortar casinos.

The brand also plans to continue creating iGaming free to play and social games for mobile phones. According to Light & Wonder, this is anticipated to be a lucrative venture. According to revenue reports given by the brand, its social gaming business has already driven an excess of $50 million in EBITDA last year, which was a boost from the $10 million it produced in 2015.