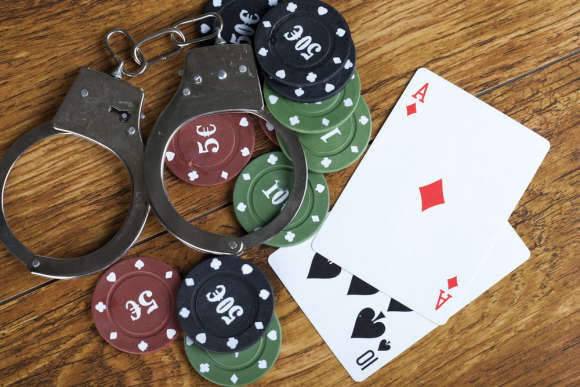 Long before sports betting became legal in New Jersey, a man in Monmouth County had his own action going. Now, it's costing him big.

Last month, John Dougherty of Keyport admitted to a federal judge in Newark that he and an unnamed conspirator ran an illegal online gambling operation for more than six years.

From January 2011 through October 2017, Dougherty worked with an unidentified New Jersey resident, acting as an agent to gather participants for their illicit gambling operation.

Dougherty had assembled a group of gamblers who, with his conspirator's assistance and knowledge, gained access to a sports betting website through their own usernames and passwords. Dougherty’s unidentified partner funded the wins and divided the payoff from lost bets with Dougherty, according to U.S. Attorney Craig Carpenito.

The partners communicated with their group of gamblers online, on cellphones, through text messages and even through UPS overnight delivery. Furthermore, the pair continually changed their phone numbers and also used code names to avoid detection, added Carpenito.

For example, in one text message exchange, Dougherty messaged his partner concerning an expected delivery of "35K" and then received the reply, "Tell me when the eagle has landed." Later that same day, Dougherty sent a picture of a UPS Express Box containing a large amount of cash, $35,000 to be exact, sent by the bettor. “Eagle has landed," he texted. "Gonna count now.”

Keyport is a borough in Monmouth County, nicknamed the “Pearl of the Bayshore.” However, the borough has sadly seen a decline over the years. Keyport is part of the Bayshore Regional Strategic Plan, an endeavor by the municipalities in the northern part of Monmouth County to revive the area's failing economy. The plan promotes traditional downtown shopping districts, maritime history, and the natural beauty of the Raritan Bayshore coastline.

The Consequences Catch Up with Dougherty

Dougherty has already forfeited $80,000 to the United States government as part of a guilty plea in exchange for lenient sentencing. The charges were conspiracy to use facilities in interstate commerce in order to carry out a business enterprise involving gambling.

U.S. District Judge Anne E. Thompson has scheduled Dougherty’s sentencing for May 6, 2020, in Trenton. The charge of conspiring to use facilities in interstate commerce to carry out a gambling business was, at the time, in violation of both federal and local state law. The crime has a maximum penalty of five years in prison and a $250,000 fine.

Assistant U.S. Attorney Imbert has prosecuted several high profile tax fraud cases in the state and U.S. Attorney Carpenito also has a history of prosecuting high profile cases. While working as an Assistant United States Attorney, Carpenito successfully prosecuted Walter Forbes, the Chairman of Cendant Corporation, for his role in the largest accounting fraud case in U.S. history at that time. Forbes was sentenced to more than 12 years in prison, and ordered to pay $3.28 billion in restitution.