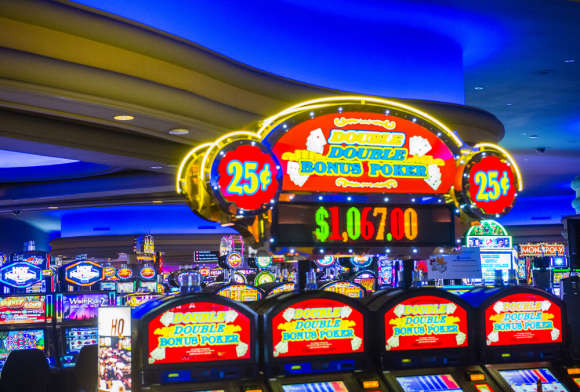 The city of Nevada is to many people the gambling destination of the United States as propagated by movies and reports of legalized betting. The statistics released from the Nevada Gaming Control Board a few days ago indicate that the month of March 2022 is the best performing period ever to be reported in Nevada.

The United States gambling population is still acting in excitement after the ease of travel restrictions occasioned by the pandemic and that could explain why slots appear to be doing really well. From the accumulated earnings, it is obvious that the one-arm bandit had an upper hand over the gambling market in Nevada for that month. In total, the earnings collected from all slots machines in the state summed up to $901.1 million.

Compared to the overall revenue collected from the entire state gambling operations, this is just 7.5% of all wagers placed in March. This translates to a total of $12 billion that was collected from the multiple casino models available to the people of Las Vegas.

In a statement which was released by the Nevada Independent which claimed that the news had been shared by a source within NGCB, it is the first time that Nevada had reported such an impressive performance. Even after hosting many gambling brands over the years, this state had only recently been able to achieve such a great milestone.

Out of the close to $1 million that had been collected from slot wagers all over the state, nearly $396 million was sourced from casinos that operated on the Las Vegas Strip. It is believed that casinos in this area exercised stringier measures in March compared to other casinos in the entire state. This ultimately meant that 8.55% of all the money collected for this business segment was held back by the casinos.

At of the time of conducting research for writing this article, the state of Nevada did not have a law that supported online casinos. This means that all the revenue that was collected from slot machines came from physical venues that required bettors to be there in person. At a glance, this speaks of the positive gambling culture in the area. A culture that is so strong that people were eager for the winds of the pandemic to blow over so that they could go back to betting on their favorite slots.

The slot movement is so huge that the casino industry has so far developed online versions to cater to a rapidly growing online customer base. For the people of Nevada however, the thrill in the slots is in operating a physical machine.

The performance of Nevada is also an indication that no segment of the gambling industry is ready to be obsolete anytime soon. With the rise of digital gaming platforms and mass registration on online gaming sites, many people thought that the brick and mortar casino is soon becoming a thing of the past. News of great performance of the slots serious dispels this assumption and offers hope to industry stakeholders that they will be in business for as long as the customer is willing and able to visit their premises.

According to a breakdown of March revenues conducted by the NGCB, gambling operators that hold nonrestricted betting licensees managed a total revenue collection of $1.355 billion in March. If the performance of March 2021 was held in comparison to the latest March result, it emerges that there is a 26.83% increase in favor of the 2022 revenues. Back in 2021, the win achieved from gaming was $1.068 billion. It is interesting to note that the March 2022 revenue marked the 13th month since the gaming industry in Nevada crossed the billion-dollar mark.

What is a non-restricted license?

It refers to trading authorization that has been issued to a betting operator by an authority charged with regulating the gambling operations in a certain jurisdiction.

Even though many operators have reported that slots continue to be their greatest revenue generator, roulette also reported boosted numbers. Sportsbooks in Nevada collected wager total of $8.1 billion which translated into a win of $445.1 for2021. As a matter of fact, the last quarter of2021 saw the state collecting a total of over $1 billion in bets. This is a figure that has never before been achieved according to regulation officials.

By the time casinos announced that they had resumed operations after the wave of the pandemic, piled-up demand for gambling services was ready to burst through. No wonder the state of Nevada has been posting impressive revenue figures since operations were resumed in 2021. Industry critics believe that the growth in demand was occasioned by savings that bettors had been putting away when they were confined indoors. In addition to this, many casinos have revolutionized their operations and most of their customers are special events as well as entertainment in proportions that they do not want to let go of.