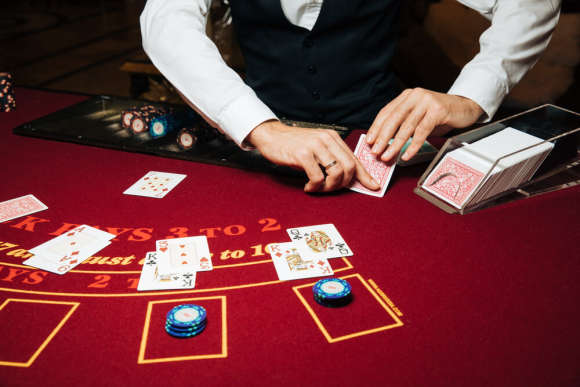 Everygame Poker has put its players on notice regarding the plans that the netting provider has in place to promote the platform. In a week or so, the poker brand will be focusing on creating thrilling experiences for its slot fans. The site will be offering its players a free trial of a new slot game from Betsoft. Kensei Blades, an anime slot will be allowing 10 spins for every player after they have deposited funds into their gaming account.

The betting operator’s management from the start of the coming week will open the platform for players to make deposits using special promo codes. Free spins will also be awarded for two extra titles; Super Sweets and Triple Juicy Drops.

Evereygame Poker will have 5 days set aside in the month of May to log in and get their reward of 10spins by playing on the recently launched Kensei Blades slot game by Betsoft. The game features a hero blade master known as Kensei who has a sidekick named Sakura. Playing the game opens up a world of possibilities for slot players since the 3-4-5-4-3 game grid provides 720 ways to win.

Set in the Japanese countryside, the Sword Saint Kensei appears to be surrounded by cherry blossoms as he guards the reels. He is alongside Sakura who in this game is considered as the brave-hearted companion. Some of the high value symbols of this slot are Crossed Swords, Glowing Hearts, Magic Staffs, Jeweled Shields, and Blazing Swords which players should be hunting for to land instant prizes and free spins.

When Sakura appears on the reels, players need to realize that they have landed the wild symbol. It appears on the second, third, and fourth reels and will replace all other symbols apart from the scatter. Kensei is the scatter symbol and comes with a 2x, 10x and even a 50x the size of the placed bet as a reward.

The quality audio-visual standards on the slot are typical of Betsoft; designed to completely overhaul a player’s mindset. In addition to the anime adventure, players need to look out for a free spins hit rate of 69.90%.

According to Head of Account Management of Betsoft Gaming, Anna Mackney, the Kensei Blades™slot title can be categorized under attractive and captivating slots. This is the first time that Betsoft is designing a slot like this one and it is quite impressive that the response is encouraging. For players that have been registered with the betting provider for a long time, there was Tiger’s Claw™ of 2018 which adopted a similar payline model. The management promises its players that they will be treated to wins and thrills owing to the good fortune that Kensei Blades brings.

Immediately the reels have been spun, players need to look out for the scatter symbol. This makes sense because the payout for landing this symbol can go up to 50x the wager. The game also comprises of casino spin icons that have the potential of delivering 8 spins. In case this round is reactivated, a player can get up to 240 spins. The chances of winning massive rewards with such an opportunity can only be great – it is almost impossible to walk away from this opportunity with nothing to line your pockets with.

In a few days, the spin week will be flagged off at the Everygame Poker online gaming site. During the course of eight days of the promotion, players will be allowed to deposit money into their account using a bonus code once they have logged in to the platform. By keying in CHOCOLATE40 and making a deposit of at least $25, players are given 40free spins on the Triple Juicy Drops slot game.

For this slot title that falls under the category of cascading titles, players can trigger multiple wins from a single spin. The slot is comprised of multiple wild symbols, prize wheels, and three jackpot prizes. There is a symbol meter integrated into the game through which players can win various casino prizes including free spins.

If a player deposits an amount of $50, and checks it out with VANILLA70 code, there is a possibility of triggering 70 spins on Super Sweets. In this gaming title, players are offered sticky wilds which are useful for building combinations of winning symbols. It is not unusual for a player to land a candy surprise in the course of reel spinning. The candy surprise appears randomly in the middle reels during gaming; it bears a surprise ticket for a re-spin or special bonus round.

The window for taking part in the special step satellites if they wish to build up performance to the final event has been set for May 15. This will also be the deadline for those who are able to buy-in directly for registration in the final. Elaborate details on how to approach either route have been provided by the organizers on the poker section of the online gaming site.

The charge of trying out the Kensei Blades is quite minimal, a factor that is going to attract players in large numbers. Considering that it is still a new game in the market, minimal charge will entice players to participate. As a matter of fact, there is no charge to play the game but this applies only to those players who will have made a deposit during the promotion period. The bonus spins will then be automatically included in a player’s account once the game is initiated.