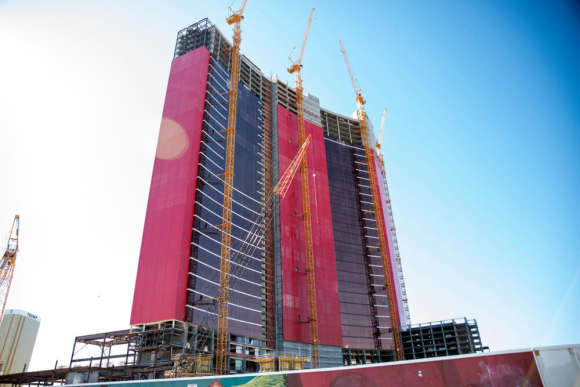 After years of planning, one of the largest projects on the Vegas Strip is finally ready to open its doors. Resorts World Las Vegas has been under construction for the past 7 years but it is now scheduled to welcome its first round of guests on June 24th.

Resorts World is the first resort of its stature to be built ground up on the Strip in more than 10 years. For the first time in the city’s history, Resorts World will launch during a pandemic that has all but toppled the Vegas economy with endless restrictions aimed at slowing the spread of the contagion.

According to the Nevada Governor, Steve Sisolak, the state plans to reopen most if not all the businesses that were closed as a result of the pandemic. Resorts World was constructed on the old Stardust site, which was a celebrated Vegas landmark and at one time was the largest hotel in the world when it opened its doors in 1958 boasting 1500 rooms. Stardust was closed in 2006 and the 32 story tower imploded a year later.

Malaysian company Genting Group bought the site in 2013 from previous owner Boyd Gaming for $350 million in 2013 and planning and construction of Resorts World resumed soon after. Resorts World, a $4.3 billion project, has been under construction since 2015.

The 88-acre property will feature more than 3,500 rooms at its 3 Hilton-branded hotels and will primarily feature an Asian theme throughout the property. The 59-story structure will occupy prime space with its front facing the iconic Las Vegas Boulevard. The 3 branded Hilton hotels, namely the Conrad Las Vegas at Resorts World, Crockfords Las Vegas, as well as LXR Hotels and Resorts will have an array of rooms and amenities.

Apart from the guest rooms, Resorts World is also expected to offer guests a selection of more than 40 restaurants, multiple shopping opportunities, a meeting and conference space, as well as a 117,000-square-foot casino. There will also be a .5-acre pool and spa complex that will include a total of 7 pools.

The last Resort of this caliber to launch on the Strip was the $9.2 billion CityCenter that was opened in December 2009. This project was a collaboration between MGM Resorts International and Dubai World. The Bellagio, which is renowned all over for its beautiful dancing water fountains was opened in 1998 and it only cost a paltry $1.6 billion.

Light at the end of the tunnel for the Strip

As the state finally starts its recovery efforts ever since the pandemic wreaked havoc in the casino business, the Strip is finally seeing light at the end of what has been a long and dark tunnel. The casino industry in the country has been one of the hardest hit by this pandemic. According to data shared by the American Gaming Associations, commercial gaming operators have experienced a 31 % revenue drop of almost $30 billion in 2020.

This is the first time that the commercial casino industry has been as badly affected in 17 years. Now that properties on the Strip are starting to resume operations and casino floor capacities are gradually going up, it is expected that business should pick up slowly. It makes things better that the vaccination process in the state and country is performing as expected, which means that the Strip should see a quick return of customers.

Hotel operations are already picking up on the Strip. For example, MGM Resorts International resumed 24/7 operations at Park MGM, The Mirage, as well as Mandalay Bay. The casinos on the Strip have been operating at limited capacities (25%) since November 2020. In February this year, the casinos were finally allowed to increase their guest capacity on the casino floor to 35%.

While most casino resorts were primarily focused on keeping things afloat and maintaining a small set of staff to keep things going, a few opted to remain closed and invest in new technology infrastructure that would then better help them serve their customers.

As such, even though Resorts World is the newest kid on the block with all its flashiness, it still has a lot to prove. For instance, Boyd Gaming Corp in conjunction with Aristocrat Technologies recently announced that they would launch a digital wallet on an app. This wallet would be connected to Boyd’s B Connected loyalty program.

In general, casinos on the Strip have managed to weather this pandemic relatively well despite the constant interruptions and closures. It hasn’t been easy for the Strip, primarily because everything that people love about the Strip including the top-notch entertainment, the unique dining scene, the professional spas and pools, have all been shut or extremely limited as a result of all the restrictions in place.

The great news is apart from resuming 24/7 operations, resorts are also starting to welcome back live entertainment. For instance, OMNIA at Caesars Palace, as well as the Wet Republic pool at MGM Grand have been open for a while now with safety precautions in place. The Liquid Pool Lounge situated at ARIA, Planet Hollywood, as well as LINQ hotel have also since resumed operations.

Restaurants in Vegas have also increased their indoor dining capacity from 35% to 50% with limitless capacity when it comes to outdoor dining. The number of people allowed to sit on each table has also been increased from 4 to 6, much to the delight of foodies everywhere.

Now, with the launch of the Strip’s largest project to date, the city is finally ready to turn the page. As the city continues to see and experience positive signs around sentiments regarding traveling to and gambling on the Strip, the Strip should be back to its original pre-pandemic state or something close to it by the end of the year.

Vegas has suffered immensely during the pandemic and is more than ready to claim back its title as the entertainment capital of the world. The launch of Resorts World Las Vegas is an excellent place to start.