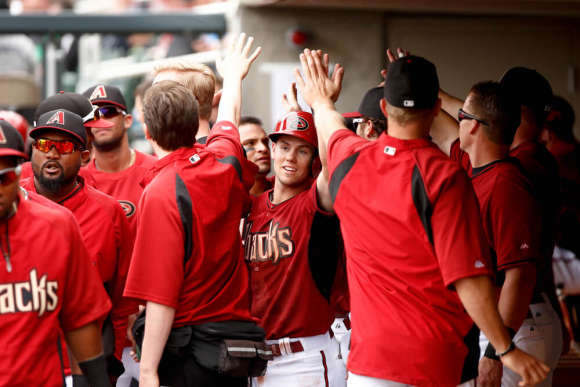 Caesars Entertainment Incorporated has signed a deal with the Arizona Diamondbacks that will allow the casino operator to bring a retail sportsbook to downtown Phoenix. Caesars Entertainment, which owns several properties across the world including some of the best casino resorts in Vegas, is now the official MLB gaming operator to launch mobile online sports betting service in partnership with the Arizona-based team.

As a result of this partnership, Caesars will open a William Hill online sports wagering service for bettors in Arizona, thus allowing punters in the state to gamble on the go while earning credits through Caesars’ Rewards loyalty program. Punters that accumulate points can redeem them at any Caesars’-owned hospitality, entertainment, dining, or gaming experience including enjoying VIP tours and experiences at Chase Field.

Owing to this partnership with the Arizona Diamondbacks, baseball fans in Arizona will be able to enjoy the game in person close to the ballpark as well as online for an unbeatable gambling experience for sports lovers. The William Hill sportsbook will be bordered by the Diamondbacks’ 48,600-capacity Chase Box house situated in the central business district of Phoenix. Within the premises will also be a broadcast studio where the Game 7 Grill used to be.

As one of the most diversified casino entertainment providers, Caesars runs various brand names including Horseshoe, Harrah’s, and of course the Caesars’ brand. Caesars also owns the London Clubs family casino. The Caesars brand is found all over the world in New Orleans, Atlantic City, Vegas, Cairo, Paducah, and more.

Caesars has a long history with sports teams and leagues across the world. Most recently, Caesars expanded its partnership with the NFL to become the league’s official sports wagering partner alongside competitors DraftKings and FanDuel. As a result of this tri-exclusive partnership, the three sportsbooks will be allowed to integrate their sports wagering content into the league’s website and app.

Aside from being one of the 3 official sports betting partners of the NFL, Caesars is the only one with an exclusive casino sponsor partnership. Just last before the end of last year, Caesars also inked a deal with ESPN that will gain it more exposure moving forward. As the sports betting landscape across the country continues to mature, the Caesars brand is doing everything possible to place itself strategically for growth.

Currently, Caesars operates sportsbooks in 16 states with almost more venues up on offer for punters to choose from than perhaps any other competitors. It already has a strong foothold in the mobile and retail sports betting industry and its influence will only keep getting stronger as time progresses and as more states welcome legalized sports betting.  As things stand, the Caesars’ is thriving in New Jersey, Louisiana, Nevada, Pennsylvania, and Mississippi, which are all sports betting hotbeds in the country.

William Hill boasts more than 100 locations in Nevada alone, many of which are in the form of kiosks situated across bars in the state. Intense competition in the sector has compelled operators such as William Hill to do everything possible to attract punters which included offering punters a bevy of bonuses and other promotions in attempts to keep them rather than lose them to competing competitors.

The sports betting boom in Arizona is one that bettors in the state have been waiting for forever since sports betting was legalized in 2018.  Finally, Governor Doug Ducey signed the sports wagering legislation and updated the tribal compact not too long ago, thus paving the way for a legal sports wagering market in Arizona. Punters in the state are expecting the launch to take place before 1st September, just in time for the NFL and college football seasons.

For sports betting to be legalized in Arizona, the Governor had to update the tribal Gaming Compact, thus giving it a 20-year extension that allows the tribes to expand their casino offerings beyond tribal lands. This makes Arizona the 26th state to offer legalized sports betting.

Unlike most states, Arizona’s legislature is different in that it permits both professional teams and sports stadiums to apply for sports betting licenses. As per the rules, a maximum of 20 brick and mortar and mobile sports wagering licenses will be connected to either the stadiums or the tribal casinos that already exist. The Native American tribes will get 10 online operators while the professional sports organizations get the other 10.

The state boasts more than 2 dozen tribes that are recognized. However, the Native American gaming leaders will not allow all of them to apply for an online license for sports betting. As one can expect, preference will be given to those interested tribes with multiple retail gaming establishments and casinos during the early stages of the launch.

Currently, the state’s teams are all working on partnerships with established sportsbook operators. The Cardinals, Coyotes, Suns, TPC Scottsdale, Phoenix Raceway will all partner (if they haven’t already) with other operators just as the Diamondbacks have done.

DraftKings has already inked a partnership with the PGA Tour as well as TPC Scottsdale that will see the well-known sportsbook open a retail location on-site at the headquarters of the PGA Tour’s Waste Management Phoenix Open, as well as its 16th Hole. The Phoenix Suns have also partnered up with FanDuel to offer punters a luxury sportsbook located within Phoenix Suns Arena as soon as the next season begins.

Apart from Washington DC’s Capital One Arena, no other state has an in-stadium retail sportsbook. Several states allow it, but only Washington has actualized it so far. The other states with authorized in-stadium betting include Illinois, Virginia, and Maryland. If Arizona stadiums go ahead and set up in-stadium betting, it could go a long way in helping it to differentiate its offerings from other regional states that also offer sports betting.

It is no secret that Arizona enjoys one of the most vibrant pro sports leagues in the country. As such, it should have no trouble at all generating interest from all the best sportsbook brands. Along with some of the names already mentioned above, other top brands expected to join the Arizona sports betting market include Barstool, Pointsbet, BetMGM, and many more.