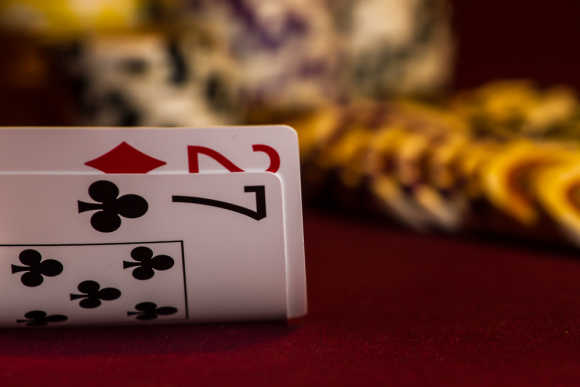 Any successful poker player knows that bluffing is absolutely essential in games big and small if one wants to win big. Everyone does it- bluffing makes most beginner’s games a little more fun, and pro games far more exciting.

If you think your poker face serves you well, check out these bluffs from the pross.

Better yet, check out our list of 8 actors who have won poker tournaments.

In this 2011 game, Canadian professional poker player Brad Booth bluffed an American pro with what was one of the most televised poker bluffs of its time.

Most players with weak hands would usually fold at this point, but no one called bluff, so Booth stuck to his guns and called.

Ivey folded and Brad took the huge pot, without showing anyone around the table his weak hand.

Dwan raised the game to $37,300 which intimidated Eastgate to call. Barry then called, and Dwan bet $104,200 despite having the weakest hand.

Peter Eastgate released, and Greenstein threw his hand away, too.

Dwan got caught in the crossfire, but made his way out of the game with a big win on a weak hand. Watch the full clip on YouTube here.

Two of the best cash players in the world at the time came head-to-head in this 2010 game. Phil Ivey, starting with over a million dollars, was goading Dwan into raising - which he did- up to $25,000 with the 8 and 9 of spades in his hand.

Ivey is seen figuring out his next move under the knowledge that Dwan might have a set, and decided to call. By this point, there was already $162,000 in the pot. Dwan bet $123,200, and Ivey called again.

The table was in complete silence as Dwan fired $268,200 and Ivey said: “Wait until you all see what I have and I’m taking this long”. Ivey eventually folded-when he should have called Dwan’s bluff-and Dwan took the $500,000 pot.

The former World Series of Poker Main Event champion Scotty Nguyen is known for being quite a character in the poker world. The Vietnamese American professional player had a net worth of around $11 million as of July 2019.  This is no small wonder with bluffs like his against Humberto Brenes in 2013.

Nguyen bluffed straight away as he opened to $21,000 with 8c-3s - he was actually holding eight-three offsuit.  Brenes, a Costa Rican pro who had been regularly playing tournaments since 1988, raised him and set the price to play at $40,000 with As-10c.

Despite his less than desirable hand, Nguyen raised to $100,000 - a move almost unheard of in the poker world.  As the game commentator states: “Now when you bet with absolutely nothing, when someone comes back over the top of you, you usually get rid of it, you muck the hand.”

But Nguyen had other plans, raising the price to play and saying ‘this is the greatest move I ever made’.

The commentator came back with: “I can’t believe what he’s doing. He’s better $100,000 on cards the Salvation Army would reject!”

When this revolutionary bluff took place in 2003, Chris Moneymaker, now worth $16 million, was still working as an accountant. He won a seat at the main event of the World Series of Poker through a $39 satellite tournament on PokerStars.

In the clip, the amateur had nothing and Farha had a pair of 9s. Moneymaker raised by a huge $500,000 with a semi-bluff.

Farha had the best hand but was unaware and folded. The commentator described it as ‘the biggest bluff of the century’.  Watch the YouTube clip here.

At the time of the 2007 PokerStars Caribbean Adventure, Isaac Haxton was representing a new generation of online players and many had yet to see exactly what he could do.

A world-famous video that comes up time and time again is American Phil Ivey out-bluffing Phil ‘Action’ Jackson in Monte Carlo for a pot of a million dollars.

With $44,000 already in the pot, Ivey was queen-eight suited while Jackson had six-five off-suit. The flop threw up 7C JC JH which marked the start of a long and hard raising war.

For more poker insights, read our article - can gamblers actually play the odds and win at casinos?