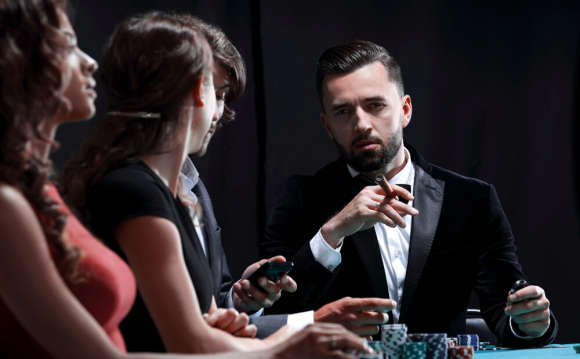 Perhaps you've walked through a casino, astonished at the people mesmerized by the slot machines. Or, perhaps someone close to you seems compelled to gamble online. Gambling disorder, DSM 5 defined, is a real thing. Moreover, it can destroy lives.

A report issued by the UK Gambling Commission estimates more than 2 million people already have a gambling problem, or at risk of developing a gambling addiction. The report also estimated that the number of problem gamblers over the age of 16 has grown by a third in just three years. Finally, the report suggests that around 430,000 people suffer from a DSM5 gambling disorder.

The Diagnostic and Statistical Manual of Mental Disorders was first published in 1952, and the most recent edition was released in 2013.

For this latest edition, the APA enlisted more than 160 top clinicians and researchers from all over the world to evaluate the evidence-based on science, to review the revisions to DSM–IV.

The Diagnostic and Statistical Manual of Mental Disorders is considered to be the "gold standard" when diagnosing mental health issues.

DSM-IV called what is now known as gambling disorder, pathological gambling and classified it as an impulse control disorder. However now, it's known as Gambling Disorder in the DSM 5 and is classified as a behavioral addictive disorder.

Research suggests that a high rate of cross-over exists between gambling and substance addiction. A study conducted in the United States discovered that more than 73% of those diagnosed with a gambling disorder DSM 5 also suffered from alcohol addiction. In fact, alcoholism is the most common co-occurring condition.

Cocaine and gambling also cross-over in terms of an overall antisocial lifestyle. A cocaine addict may see gambling as an acceptable way to acquire drug money. Their cocaine habit may also increase their energy as well as inflate their opinion of their gambling skill, believing that they can’t lose.

Problem gamblers, alcoholics, and drug addicts also share some of the same genetics for impulsivity and reward-seeking.

To meet the parameters for gambling disorder in the DSM 5, someone must have at least four of these symptoms within the last year.

Someone with a DSM 5 gambling disorder can have periods where gambling doesn’t seem to be a problem. However, the uncontrollable urge to gamble always eventually comes back.

Those diagnosed with bipolar disorder often engage in compulsive and addictive behavior, including gambling. Some of the people you see glued to video poker machines could be bipolar. They also spend too much money on lottery tickets and haunt casinos.

Extreme mood swings are a key component of bipolar disorder; these mood swings can cause fluctuating energy levels. During a manic episode, a bipolar individual can feel excited and joyful, and filled with a sense of purpose. But they can also suddenly sink into depression, feeling joyless, sad, and tired.

While there is no question that gambling disorder can stem from emotional problems, it's treatable in the same way as substance addictions. Cognitive-behavioral therapy and 12-step programs are often successfully used to treat a gambling disorder DSM 5.

On the other hand, people who have bipolar disorder engage in gambling as a way to self-medicate their bipolar symptoms. This is not the same as a gambling disorder, despite the behavior as well as the consequences being the same. This is not to say that gambling during manic or depressive episodes are not serious. It's just to point out that a gambling disorder according to the DSM 5 is a pattern of addiction, not something that occurs during a bipolar phase.

However, a study conducted by the British Journal of Psychiatry found that moderate to extreme gambling issues were four times higher in bipolar individuals compared to the general population. So the connection can not be denied. However, the core issue, either bipolar disorder, or gambling disorder DSM 5, needs to be determined for proper treatment.

One of the fascinating and unique things associated with gambling disorder DSM 5 is magical thinking. Like other addictions, denial of the problem is quite common. However, unlike other addictions, people with a gambling disorder engage in magical thinking. They are unusually superstitious, and those very superstitions reinforce their addiction. They have a near-magical belief in winning, to the point of engaging in a sort of sympathetic magic.

Moreover, those with a gambling disorder can believe that luck is personal, and that some people are imbued with “luck”. They can also believe in lucky objects, such as a rabbit's foot or a lucky charm. Luck is constantly just out of reach, and they may have personal rituals to strengthen their luck.

The designers of video slot games play upon this magical thinking, crafting their games around magical, fantasy themes. While an ordinary person will see the characters in a slot game for what they are, cartoon characters, a compulsive gambler sees it differently; they can be drawn into the fantasy world, actually believing in the cartoon princess, pirate, or wizard. They begin to believe that a cartoon character is actually leading them to hidden riches. They just have to stay the course.

Another pattern of distorted, magical thinking involves "chasing losses”. A problem gambler really believes that they will win their losses back, and then some.

Furthermore, magical thinking includes “near-miss beliefs”. Gambling addicts often ease their minds after losing by telling themselves they “almost” won. This is another psychological feature video game developers can exploit. In the gambler's mind, these near misses justifying even more gambling. In fact, near misses can be even more stimulating, than actually winning.

One of the major factors that changed gambling disorder to be classified as an addiction in DSM-5 involved neurochemical tests and brain imaging. Much of that research supports classifying compulsive gambling with other addictions.

These studies revealed that gambling and drug addiction share much in common, in the way they react with the brain. Research indicates that gambling triggers the brain's reward system similarly to drugs or alcohol. Specifically, deep with the brain is the reward center, the ventral striatum. This brain  has been shown to be involved in both addiction and rewards.

When test subjects with gambling disorder played gambling games while their brains were being scanned, changes in blood flow to specific brain regions were noted. These changes indicated which areas of the brain were more active. In one study, gamblers showed reduced activity in the ventral striatum compared to healthy test subjects. Furthermore, problem gamblers had less ventral striatum activity while gambling and during the anticipation of winning, compared to normal people.

While those findings seem counterintuitive, researchers think otherwise. They postulate that people with a gambling disorder suffer from an underactive brain reward system. Because of this, they are drawn to gambling as a way to stimulate those reward pathways in their brains.

Presently, it's unclear whether brain differences lead to gambling disorder, or if compulsive gambling causes changes in the brain.

The neurotransmitter dopamine is released in the brain during fun activities like sex, eating, and doing drugs. However, it's also released during situations in which the reward for an action is uncertain. Moreover, potential, anticipated reward increases the release of dopamine. The anticipation of a reward could explain why the release of dopamine is tied to the gambling “high”. Dopamine also probably reinforces the risk-taking behavior of problem gamblers.

It seems counterintuitive, but losing can trigger the release of dopamine in a gambling addict to nearly the same level as winning. As a result, losing triggers the urge to keep playing, or, chasing losses.

Curiously, gambling disorder DSM 5 ranges between .4% and 3.4% in adults, however, it seems to be more common in those suffering from Parkinson's disease. This could be because Parkinson's disease is often treated with dopamine agonist drugs. These medications stimulate the dopamine receptors in the brain, mimicking increased dopamine levels.

Parkinson's patients taking some dopamine agonist drugs, saw an increased risk of developing a gambling disorder of 50%. The neurotransmitter dopamine influences the action of reward and reinforcement, likely playing a role in gambling disorder.

One of the main reasons why gambling disorder has come to the forefront is the extreme consequences for both the gamblers and their families. People with a gambling disorder often gamble away everything they own, resulting in bankruptcy. Not only that, they are much more likely to become suicidal compared to most people. Around half of those in treatment have suicidal ideation, and in one study, 23% of problem gamblers attempted suicide.

However, it remains unclear whether gambling itself increases the risk of suicide. Likely, financial losses, debt, job loss, and damage to personal relationships make suicide seem like the best option. The conclusion to be drawn is that a combination of impulsivity, mood disorders, and social factors explains suicidal behavior.

Fortunately, most problem gamblers who have had suicidal ideation have recovered, and gone on to lead healthier lives. Treatment and support groups can help those with a gambling disorder learn coping skills, and end thoughts of suicide.

Warning signs that someone you know may be at risk for suicide:

If you or someone you know is at risk for suicide, immediately call the National Suicide Prevention Lifeline: 1-800-273-TALK.

Psychological comorbidities are the rule, not the exception, for those with a gambling disorder. The majority of problem gamblers can also suffer from alcohol dependence, drug or other addictions, depression, anxiety, bipolar disorder, impulse control disorders, or a personality disorder.

Problem gamblers clearly have a relationship with substance abuse. One survey found that compulsive gamblers had seven times the rate of alcohol or drug abuse than recreational gamblers or non-gamblers. Surveys also show that the rate of alcohol dependence is at least 4 times higher among those with a gambling disorder than the general population.

Anxiety disorders are also strongly associated with gambling disorders. One study found that over 60% of problem gamblers' samples had some type of anxiety disorder. More than half suffer from phobias, 22% have panic disorder, and nearly 15% have posttraumatic stress disorder.

Do You Meet the Criteria for Gambling Disorder, DSM 5?

If you recognize some of the signs and symptoms of a gambling disorder within yourself, discuss having an evaluation with your doctor, or mental health professional.

To evaluate you for a gambling disorder, you'll likely be asked the following:

Once a diagnosis is made, you can work with your doctor or mental health professional to come up with a treatment plan. Treatment could include:

Does Someone You Know Have a Gambling Problem?

Someone with a gambling problem affects the lives of everyone close to them, from family, friends, and coworkers. Dealing with someone who has a gambling disorder can be draining. It's better to use your energy to change your own situation rather than try to change them.

It is important to keep in mind:

Suggestions to ease the strain on relationships caused by a gambling disorder include:

Finally, never lend a gambler money, and do not pay their debts. Also, remove your name from any joint accounts, to help keep your credit record clean. Don't sign anything you haven't read or understand.

You can love and support a gambler, while also protecting yourself.

While dealing with a gambling disorder is overwhelming, it can be overcome. The first step is to admit there is a problem. The second step is to seek help. Change won't happen overnight, so stick with it. One day, gambling will no longer rule your life.